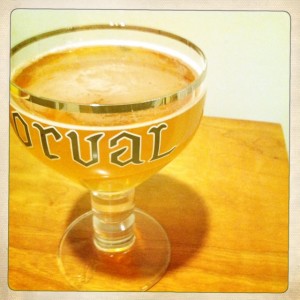 Do you have a family beer?  Oddly enough, we do.  My father’s family is from the South of Belgium and most family occasions were marked by the sound of a cap coming off a frothy bottle of Orval, the region’s best Trappist beer.  I remember my grandmother trekking off to the monastery before a big family dinner to buy not only beer but creamy Orval cheese. 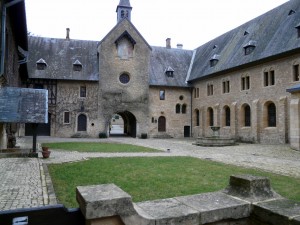 The first monks settled in Orval from Italy in 1070.  The abbey has lived a tumultuous existence, from a major fire in the 13th century to near collapse during the French Revolution, when it was burnt down again by French forces.  What remained of the abbey lay abandoned until 1887, when the land was acquired by the Harenne family, who later donated the land to the Cistercian order.  A new monastery and church were completed between 1926 and 1948. Monks first started producing beer in 1931 to help finance the reconstruction project.

The new church and abbey aren’t open to the public, but visitors can wander freely through the stunning ruins of the old abbey.  There is also a museum and a garden of medicinal herbs used by the monks.

A few years ago, I went to visit my father, who was dying of cancer and had decided to spend his few remaining months in the Belgian village where he was born.  One day, he was feeling a little stronger and suggested an outing.  There was no question where we would go: l’Abbaye Notre Dame d’Orval.  He wasn’t well enough to get out of the car but I spent a contemplative hour wandering the haunting grounds of the Orval Abbey in mid-winter.

On a more recent trip to Belgium with my own kids, we visited the abbey.  As usual with three boys, we were one of the more “energetic” groups there and we played hide-and-seek in the ruins on a gorgeous
August day before heading off to visit relatives.

Today, my brother and sister and their families have all settled in the United States.  We get together at least once a year for a good old Belgian dinner: mussels, frites, homemade mayonnaise, chocolate, Liege waffles, and a certain family brew.

May I present a toast of frothy Belgian Orval, to the memory of my ancestors and my father, and to future family dinners and celebrations.  A votre santé!