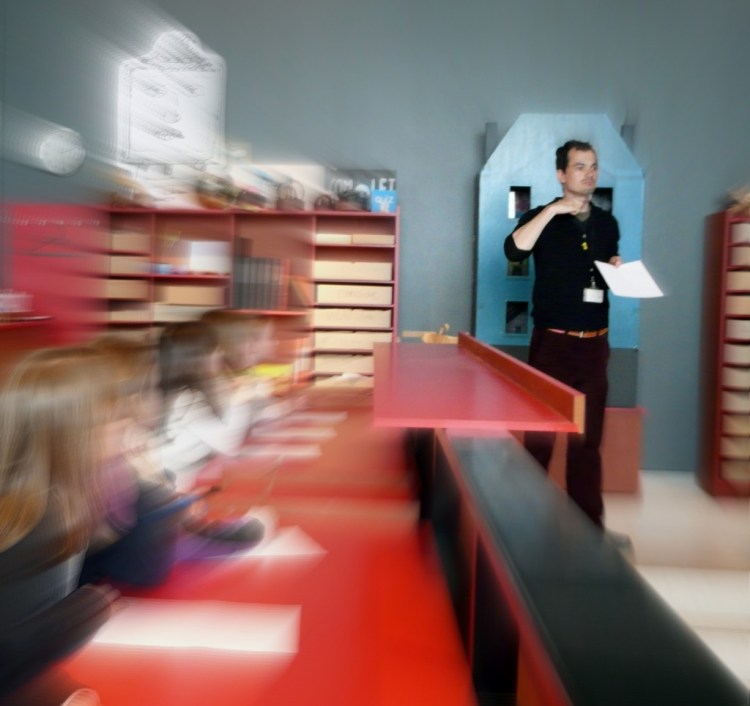 Hmmm, I thought, this is either a particularly well-behaved class, or there’s some truth to that annoying “European children are better behaved” theory.  Then why did these chaperones have the same bleary-eyed weary look that befalls all of their American counterparts?  Let me introduce Raphael…

From the get-go, it was clear Raphael was the class trouble maker, aka the spirited one.  With three kids of my own, I’ve chaperoned my share of field trips and was happy to be just an observing journalist on this local second-grade field trip to Brussels’ Magritte Museum.   As we wandered through the stark modern exhibit rooms, I smiled knowingly at the increasingly exasperated parent chaperones as young Raphael yelled out his own interpretation of every painting we saw, interrupting his classmates and our guide at every turn.

After the tour, we proceeded to the much-anticipated art activity, while the chaperones took a break. Not one to pass up an art project, I rolled up my sleeves and joined the class. The craft room was beautiful—bright, airy, and full of new-looking art supplies, neatly put away in the red cubicles that lined the walls.  There was the usual silent scuffle as kids vied for seats next to their besties.

I was seated next to Raphael.  We were going to play an art game—apparently a favorite among Magritte and his surrealist friends.  Basically, we would fold a piece of paper in three and draw one part of a person (head, torso, legs), then pass it along to our neighbor, who would draw the next part.

Raphael worked hard on his head and, as he folded it and passed it along to me so I could draw the torso, he said to me under his breath, “You’d better not mess mine up.”  OK, no pressure.  I worked hard on my torso.  But he looked over, shook his head disgustedly and mumbled something about ruining his drawing.

OK, I thought, I have one more chance to redeem myself.  So again, I took my time with the feet, hoping to wipe off the look of disdain from my seven-year-old neighbor’s face.

It was time for the reveal!  We were to take a quick look and then our just-returned-from-break parent chaperones would collect them.  I unfolded my piece of paper (the one with the Raphael-drawn torso) and turned bright red.  Raphael had expertly drawn a woman’s naked chest.  Somehow I managed to hand over “my” drawing to the chaperone.  I’m still not sure how I survived the daggers that shot out of her eyes when she saw it.  I wanted to explain, “No, you see, it wasn’t me.  It was a game.  I drew the feet.  It was Raphael.  IT WAS RAPHAEL!”

Do you have an embarrassing travel tale or two? We’d love to hear them!