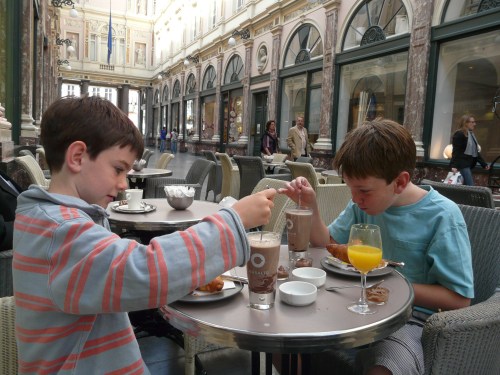 I lived in Belgium until I was nine years old.  As a teen, I went back every summer, but somehow I haven’t managed to make it back very often as I got older.  When we took our three boys last summer, I rediscovered my home country through their eyes.  They met relatives they never even knew they had, and even some of my childhood friends.  Thanks to their advice and company, we had a fantastic time in Brussels, a city I remembered more for its nightclubs and bars I went to during high school summer vacations than for its child-friendly attractions.

Brussels is a great city to explore with kids.  It’s small, walkable, and oh, so delicious!  Start at the breathtaking Grand Place and everything I describe below, you can do on foot.

Step Into a Comic Book: For a country the size of New Jersey, Belgium has produced a tremendous amount of comic books, from the familiar Tintin, Smurfs, and Le Chat, to lesser known figures such as Cubitis.  Brussels offers a fantastic walking tour that showcases this native artform by taking you through various neighborhoods with over thirty open-air comic book murals painted on the sides of buildings. Children will love navigating the map and make a game out of being the first to spot the murals. Click here for a printable walking map.

Belgian Comic Strip Center: Housed in a beautiful 1906 art nouveau building, a typically Belgian architectural style, designed by Victor Horta, the Belgian Comic Strip Center was one of the highlight of our trip to Brussels.  We saw exhibits about familiar comic book characters like the Smurfs and Tintin and a host of others we had never seen before.  Some of the exhibits had tiny dioramas of scenes from the books which we spent a long time exploring.  They also had plaster replicas of well-known objects from Tintin books such as the rocket ship, King Ottokar’s scepter and automobiles.  The museum also has a very cool but very expensive gift shop.

Drink Hot Chocolate: You’re in Brussels, you brought the kids, you’re going to eat chocolate.  Lots and lots of chocolate.  Do not neglect the hot molten milky confection that is Belgian hot chocolate. Order it in one of the charming cafes that line the Galeries Royales shopping arcades and you will get a bowl of small chunks of rich Belgian chocolate to mix into a tall silver-handled glass of hot milk.  I guarantee you’ve never had one this good.

Mannekenpis Costume Exhibit (plus weirdest bathroom ever): I didn’t bother suggesting a visit to see Mannekenpis.  It’s given that your kids will want to see it.  After all, what child wouldn’t want to see a statue of a little peeing boy.  But even the most ardent fan will only be able to stay for a few minutes.  It’s just a statue, after all. What I do recommend is the exhibit of the Mannekenpis’ wardrobe, located on the top floor of the Musee de la Ville de Bruxelles, or the Brussels City Museum.  Most of the costumes were presented as gifts from visiting dignitaries from all over the world so you’ll see everything from the Korean national dress to a World Cup soccer uniform on small replicas of the pissing boy himself.    It’s a fun exhibit but beware the bathroom.   We’re still talking about it as “the weirdest bathroom ever.”  Consider yourself warned.

Eat Free Mussels: I need to post a disclaimer here, just to say that Chez Leon is not the place I would have gone to eat in Brussels without children.  There, I’ve said it.  But as much as I love eating off-the-beaten path, I am frugal at heart, especially when traveling with the kids.  Having said that, we had a lovely meal and I saved a mussel pot full of Euros.  Chez Leon is on the picturesque, if touristy, Rue des Bouchers, right off the Grand Place and has a lot of outdoor tables.  The free kids’ meals (one per adult meal) offered large portions of mussels and several other choices, including pasta.  According to my ten-year-old, the child’s meal only had two or three fewer mussels than the adult version.

We all came back a little portlier for the chocolate and proud of our Belgian heritage.

For more fun things to do in Brussels with the kids, check out our posts on the Moof, experience Brussels, the Hergé Museum, and our favorite Brussels book store.

Of, if it’s a sidetrip you’re looking for, we have those too: Ghent, Bruges, Antwerp, and the medieval abbey at Villers-la-Ville.

Also take a look at these excellent tourism resources: VisitBrussels and www.365.be.