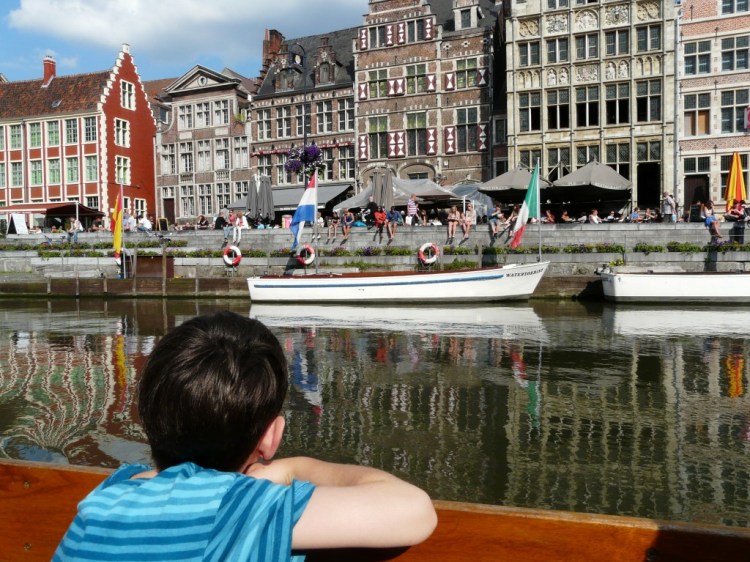 When you mention Belgium to a fellow traveler, they’ll often get a faraway look on their face, sigh, and start waxing poetic about the medieval city of Bruges.  I have to agree, Bruges is an extraordinary place, but when I took my boys to Belgium for the first time last summer, I decided to forego Bruges (gasp, I know, but we were pressed for time), and to go to Ghent instead.

I’d been to Ghent once before, when I was in my early twenties.  It took my breath away then and, for years, whenever I thought of it, I got a faraway look on my face, sighed, and swore to myself I’d return with my children some day.  I was able to do exactly that with Jacques (8) and Julian (10) last summer and Ghent did not disappoint.

Once a thriving medieval city that rivaled Paris in size and prominence, today, it is a carefully maintained historical gem and also a thriving and increasingly trendy modern-day city. Here are the highlights of our fabulous 24 hours in the modern medieval city of Ghent. 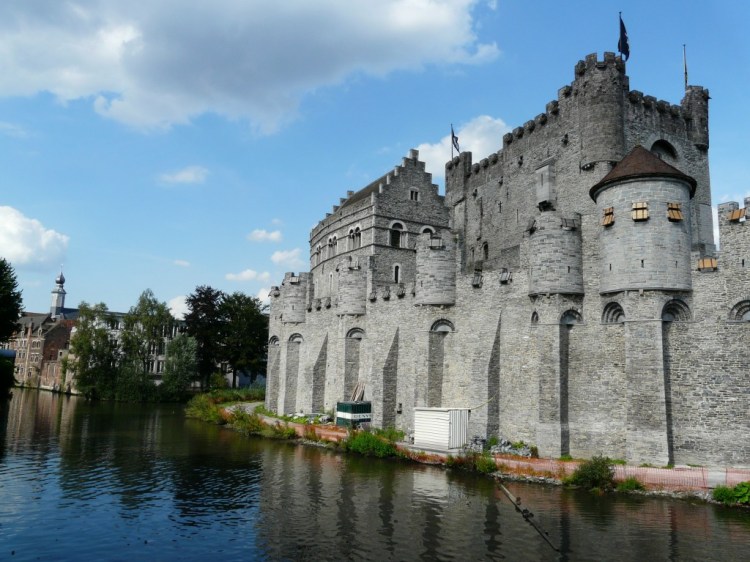 Gravensteen Castle as seen from the canal.

Gravensteen Castle: Last summer, we must have visited about 10 castles in Belgium, France, and Germany.  Gravensteen Castle was by far our favorite.  The original castle was built in 868 by Count Baldwin I and rebuilt and expanded in 1180 by the Count of Flanders.  It was later used as a prison, and finally a manufacturing house.  Parts of the castle were rebuilt to their medieval glory in the late 19th century, which puts its authenticity in question by certain scholars but certainly didn’t deter us from enjoying it.

It is the quintessential medieval castle, strong, foreboding, dark and full of secret passage ways and creepy rooms.  The beauty of visiting this castle with kids is that, unlike so many that we saw, it wasn’t crowded on a weekday morning and we were able to wander around on our own, letting our imaginations roam free.  This was a challenge in many other castles, when you’re trailing behind a busload of elderly tourists with a fretful eye on the kids lest they touch a verboten object.  This castle is thankfully light on decorative objects.

The Museum of Torture: Housed within Gravensteen Castle, this collection of medieval torture instruments definitely adds to the creepiness factor.  They have instruments of torture used in Ghent throughout the ages, and a real guillotine.  My boys were thrilled.  This is clearly not for younger kids but you can easily skip it and still enjoy the castle.

Canals: In my 30 (cough cough) something years of traveling, I’ve only been on maybe two guided boat rides.  It wasn’t my parents’ thing growing up and it certainly isn’t mine.  But it was a rare gorgeous day in Ghent and there were no lines.  A guided cruise around the ancient canals lined with centuries-old guild houses, churches, and ancient bridges turned out to be a highlight for us.   The tour took about an hour.

Flea markets: Ghent is known for its outdoor markets, and, like its medieval markets of yore, they sell everything from flowers, to pigeons, to produce and household goods.  Most of the larger markets are held on the weekends, but we talked to our hotel’s concierge who recommended a weekday market right around the corner from our hotel.  We went early on a rather brisk morning and enjoyed flaky chocolate croissants, hot chocolate, and espresso at a little stand at the market.  We spent about an hour poking around, looking at everything from junk to kitsch, to antiques.  We particularly liked the old toys and came away with three Belgian lead soldiers from WWII.  My grandfather was a Belgian soldier who fought in that war so it was the perfect keepsake for us.  For a schedule of the markets: http://www4.gent.be/gent/english/tourism/markets.htm

Food: Exhausted at the end of our long day, we opted for a casual local pizza joint, Il Cortile.  The pizza was great, the prices good, and the service slow. Address: Kraanlei 53.

Getting there: It is only about a 45-minute train ride from Brussels to Ghent.  We arrived by train at the central station and took the tram to the old town on the other side of the city, about a 45 minute ride.  The tram driver was extremely helpful in helping us figure out where to get out close to our hotel.

Hotel: We stayed at the Ghent River Hotel, a stylish boutique hotel in a great location in the old part of town.  The room was comfortable and very well appointed. http://www.ghent-river-hotel.be/

For more information about visiting Ghent and other cities in Flanders, go to VisitFlanders.